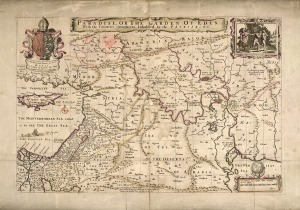 1690 map including Garden of Eden

Adam and Eve were put in the Garden of Eden, not created there. That’s the answer to a trivia question I sometimes ask Bible study groups I teach. For some odd reason, maybe the fact that the current worldwide economic meltdown sounds a lot like end-time prophecies to me, beginning-time stuff began to drift through my brain yesterday.

What was outside the Garden? Obviously it wasn’t a paradise like the Garden was, else why put the offending couple out? And from the job description Adam had, not only was it not a paradise, it was not a pleasant place. Not a cultivated farm or even a cleared field, it was just plain planet, wild and raw.

Really it was raw material, waiting for something to be done with it. Cut, clear, plow, plant, build, tame, explore, investigate, map, inhabit, organize, civilize.

Without a how-to manual, the best way to go about all this would be to remember the Garden. The prototype. We don’t know how long Adam worked in the Garden, but work he did. He had time to get to know the place, see how things worked, including all those animals. He named the animals, after all. God let Adam do that and whatever Adam wanted to call an animal, that’s what it was. Elephant? Okay, fine. Ostrich? Sure, why not.

People speculate about whether the Garden was real or figurative, and if real, about its location. The named rivers in Genesis only give us a partial clue. I think it was a real place. Its design gave Adam enough information to survive in the wilderness outside, the rest of planet earth.