Praying one day as I read an APOD (NASA’s Astronomy Picture of the Day) about black holes, I asked the Lord a question. What are they for? “Trash compactors,” he replied. Hmmm. Here’s an APOD about our own Milky Way and it’s black hole, Sag-A*. 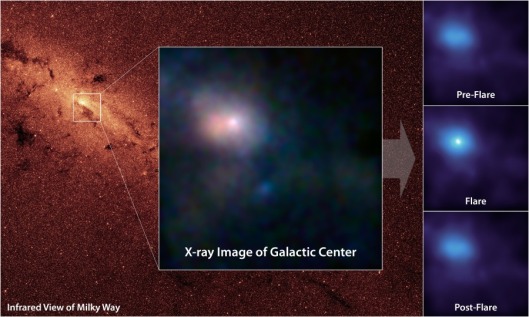 At the center of our Milky Way Galaxy, a mere 27,000 light-years away, lies a black hole with 4 million times the mass of the Sun. Fondly known as Sagittarius A* (pronounced A-star), the Milky Way’s black hole is fortunately mild-mannered compared to the central black holes in distant active galaxies, much more calmly consuming material around it. From time to time it does flare-up, though.

An outburst lasting several hours is captured in this series of premier X-ray images from the orbiting Nuclear Spectroscopic Telescope Array (NuSTAR). Launched last June 13 (2011), NuSTAR is the first to provide focused views of the area surrounding Sgr A* at X-ray energies higher than those accessible to Chandra and XMM observatories.

Spanning two days of NuSTAR observations, the flare sequence is illustrated in the panels at the far right. X-rays are generated in material heated to over 100 million degrees Celsius, accelerated to nearly the speed of light as it falls into the Miky Way’s central black hole.

The main inset X-ray image spans about 100 light-years. In it, the bright white region represents the hottest material closest to the black hole, while the pinkish cloud likely belongs to a nearby supernova remnant.

I’ve been reading up on stars, galaxies, pulsars, quasars and black holes in the last week or so. A life-long interest in all things space was no doubt “inherited” (by osmosis, sort of) from my mother, who had purchased a telescope and spent many hours staring up at the sky. Here’s a timely, to me anyway, article about black holes from Space.com.

Though scientists have suspected for a while that a giant black hole lurks at the center of our galaxy, they still can’t say for sure it’s the explanation for the strange behavior observed there.

Now researchers are closer than ever to being able to image this region and probe the physics at work – potentially shedding light on the great conflict between the theories of general relativity and quantum mechanics.

At the heart of the Milky Way astronomers see some wacky things. For example, about a dozen stars seem to be orbiting some invisible object. One star has been found to make a 16-year orbit around the unseen thing, moving at the hard-to-imagine speed of about 3,000 miles (5,000 kilometers) a second. By comparison, the sun moves through space at a comparatively glacial 137 miles (220 kilometers) a second.

Based on the laws of motion, these dozen stars’ orbits should be caused by the gravitational pull of some massive object in the center of the galaxy. Yet telescopes observe nothing there.

“The really important thing is that all the orbits have a common focus,” astrophysicist Mark Reidof the Harvard-Smithsonian Center for Astrophysics said during the recently concluded April 2012 meeting of the American Physical Society.”There’s one point on the sky, and there’s nothing you can see on images at this position.”

Plus, all this is happening in a region only about 100 times as wide as the distance between the Earth and the sun – very tiny in the galactic scheme of things. [Photos: Black Holes of the Universe]

There is, however, a very faint emission of radio waves coming from this area, which scientists call Sagittarius A* (pronounced “Sagittarius A-Star”). By comparing it against the sun’s movement around the Milky Way, researchers have been able to determine that this object is barely moving at all – less than 1 kilometer (0.62 miles) a second, much slower even than the rate that the Earth revolves around the sun.

If Sagittarius A* were any moderate-mass object, it likely would be pulled by the gravity of nearby objects and experience some motion.

Reid said of the object’s apparent stillness: “The only way that this can happen is if Sagittarius A* is tied to a very massive object. When you do the analysis, you get a lower limit of 4 million solar masses.”

The density limit of a black hole

Astronomers can’t see the galactic center well enough to measure exactly how large Sagittarius A* is, but they can say for sure that its radius is no larger than about two-tenths the distance between the Earth and the sun.

The means that in the center of the Milky Way, something packing about 4 million times the mass of the sun is sitting within an area that could fit inside the orbit of Mercury and is basically invisible, producing much less light than any of the stars orbiting it.

Right now, that puts this object’s density at about an eighth of the theoretical limit for a black hole. So while scientists can’t say for sure the object is a black hole, it’s looking mighty likely.

“Although there are alternative explanations, they would actually be even much more fantastic than the rather mundane supermassive black hole that almost certainly is there,” Reid said.

One of these other, exotic explanations is that there exists a ball made of an unidentified variety of heavy fermion particles. But even such a ball would be unlikely to have the density required to explain all the evidence.

To finally solve this riddle, astronomers yearn to image the center of the galaxy directly. Not only is it very distant and faint, this region is hard to see because of all the dust between it and Earth.

Astronomers have recently begun a project called the Event Horizon Telescope. This instrument would integrate many radio observatories around the world, turning them into a giant interferometer capable of very precise measurements. Ultimately, the resolution should be sharp enough to distinguish Sagittarius A*.

So far, the Event Horizon Telescope has integrated only three observatories, in Hawaii, California and Arizona, for an observing time of between 15 and 20 hours. But astronomers hope to add more locations and observing time soon.

“EHT is not a dream, it’s not on the drawing board,” said Avery Broderickof Canada’s University of Waterloo and the Perimeter Institute for Theoretical Physics.”It’s something that works.”

One of Broderick’s goals is not only determining once and for all if Sagittarius A* is a black hole, but probing the physics of the object.

So far, quantum mechanics and general relativity are incompatible. When combined to describe black holes, the equations break down and suggest that the density of a black hole is infinite.

Though the Event Horizon Telescope has produced only very preliminary data so far, Broderick and his colleagues have used them to test the space-time predictions of general relativity.

“Even with existing data today we can say something interesting about the higher-order structure of astrophysical black holes,” Broderick said. “We will in principle be able to distinguish deviations from general relativity.

“General relativity is safe for right now, but it’s not going to be safe for much longer.”