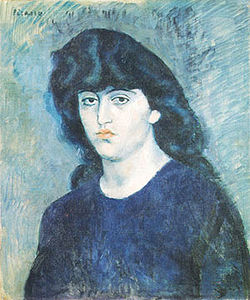 Colors define eras in some artists’ work. For instance, Picasso’s Blue Period (1900-1904) when he painted mostly in shades of blue and blue-green. He went from painting in mood-reflecting shades of blue, to rose, to black, depending on events in his life, so art historians claim.

Jazz musician Miles Davis had a blue period, too – he even recorded an album titled “Blue Period.” His own musical mood was reflective of happenings in his own life, broken relationships, drug addiction, emotional depression.

The last couple of months I’ve felt blue-green myself. I’m even wearing more black and blue clothing than usual, for me. I’ve felt unsettled. A bit quiet, but not a restful quiet. As if I’m listening for the other shoe to fall…

As I read assorted scripture passages these days, I seek out those that describe today. Happenings. Relationships between nations, between national personalities. Cause and effect events, some political, some social, some natural, and some supernatural.

As I read and think about Jesus’ description of disasters in Matthew 24, some political, some social, some natural and some supernatural, I listen to the internal voice of the Author. Sort of a running commentary.

I personally believe every one of those predictions have already come true. Yes, I know some Bible scholars say “this gospel of the kingdom” has not yet been preached to all the world. We still have some ethnic groups left to find, still have some preaching to do, right?

Maybe. But the witness to all nations has certainly been accomplished. When the book of Matthew was written, how many nations were there? How many have risen and fallen since then? How many more are being created as we speak? How many ethnic groups have splintered and split, how many become extinct?

It’s true that Jesus said it would be after all that, that the end (of the age) would come. He didn’t say it would be immediately afterward, though, so maybe we have a few years yet to go…

I don’t count on it. Why? Because of what I am NOT reading in the major secular media headlines. Jesus has become less dependent on mankind to preach “this gospel of the kingdom” in some places. Visions and dreams of Jesus are driving people by the dozens, even hundreds, to find someone to talk to them about Jesus. This is happening with increasing frequency in the African – Middle Eastern regions of the world, and probably other places too.

As I read and pray and listen and read, I’ve started keeping a running blog (www.tapister.wordpress.com) with news articles that fit one or more of the descriptions in Matthew 24 and elsewhere. Some days there are so many that I just settle for one.

And people keep on buying and selling, eating and drinking, marrying and giving in marriage. It’s only logical to be in the midst of a blue period, seems to me.