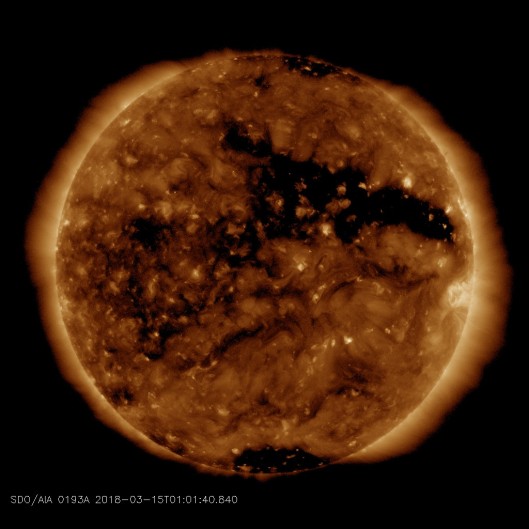 THE SOLAR WIND HAS ARRIVED: Earth is entering a stream of high-speed solar wind flowing from a wide gash in the sun’s atmosphere. NOAA forecasters say there is a 55% chance of G1-class geomagnetic storms on March 15th as the gaseous material envelops our planet. (From SpaceWeather.com online .)

There is a funny story posted on The Watchers website today about this particular event that is interesting – funny, but still interesting:

According to many media sources, a massive solar storm is supposed to be ravaging Earth today. Some MSM channels, and several well-known alternative, went as far as posting fake news about a ‘massive X-class solar flare hitting Earth’ today… they claim that Russian Academy of Sciences is the source of this dire warning. But it’s not…

“The stories are overblown,” Dr. Tamitha Skov said, referring to fake news stories about a massive solar storm that is supposed to be ravaging Earth today.

NASA’s Solar and Heliospheric Observatory (SOHO) has captured images of an unusually large coronal hole on the surface of the Sun. At one point, it was so large that it covered nearly a quarter of the Sun’s visible disk — a distance equivalent to 50 Earths placed side-by-side.

As dramatic as this sounds, coronal holes are nothing to worry about. The phenomenon happens every 11 years as the solar cycle comes to an end and the Sun attains its solar maximum — a regularly occurring event in which the magnetic fields on the Sun reverse and new coronal holes appear near the poles with the opposite magnetic alignment.

These holes are dark, low density regions located in the outermost region of the atmosphere. They contain little solar material and are significantly cooler than their surroundings, which gives them their darker appearance.

According to NASA, coronal holes can influence some aurora on Earth. After magnetic forces open them up, they spew solar material at roughly twice the speed found on other parts of the solar surface.

New sunspot 1496 unleashed an impulsive M3-Class solar flare on June 3rd at 17:55 UTC. The explosion hurled a coronal mass ejection (CME) into space. The cloud does not appear to be heading for Earth, although this conclusion could be revised by further analysis. A powerful solar tsunami was produced at the blast site as well. Fortunately, amateur astronomer Thomas Ashcraft was monitoring the Sun from New Mexico when the flare occurred and he video-recorded the event.

Solar tsunamis pose no direct threat to Earth. They were discovered back in 1997 by the Solar and Heliospheric Observatory (SOHO). In May of that year, a CME came blasting up from an active region on the sun’s surface, and SOHO recorded a tsunami rippling away from the blast site. 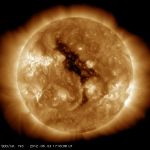 Meanwhile, a big dark hole in the sun’s atmosphere, a ‘coronal hole’, is turning toward Earth spewing solar wind. Last night we experienced minor geomagnetic storming. Coronal holes are places where the sun’s magnetic field opens up and allows the solar wind to escape.

The stream of solar wind flowing from this coronal hole will reach Earth on June 5th – 7th, possibly stirring geomagnetic storms again. High-latitude sky watchers should be alert for auroras.