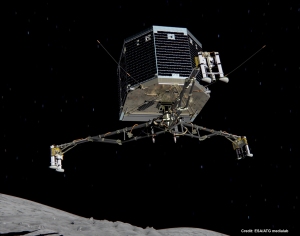 The 100-kilogram Rosetta lander is provided by a European consortium under the leadership of the German Aerospace Research Institute (DLR). Other members of the consortium are ESA and institutes from Austria, Finland, France, Hungary, Ireland, Italy and the UK.

The box-shaped lander is carried on the side of the orbiter until it arrives at Comet 67P/Churyumov-Gerasimenko.

Once the orbiter is aligned correctly, the lander is commanded to self-eject from the main spacecraft and unfold its three legs, ready for a gentle touchdown at the end of the ballistic descent.

On landing, the legs damp out most of the kinetic energy to reduce the chance of bouncing, and they can rotate, lift or tilt to return the lander to an upright position.

Immediately after touchdown, a harpoon is fired to anchor the lander to the ground and prevent it escaping from the comet’s extremely weak gravity. The minimum mission target is one week, but surface operations may continue for many months. 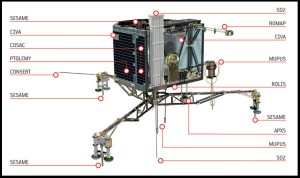 The lander structure consists of a baseplate, an instrument platform, and a polygonal sandwich construction, all made of carbon fibre. Some of the instruments and subsystems are beneath a hood that is covered with solar cells.

An antenna transmits data from the surface to Earth via the orbiter. The lander carries nine experiments, with a total mass of about 21 kilograms. It also carries a drilling system to take samples of subsurface material.