The tea parties were numerous, the crowds well-behaved, the signs instructive and/or entertaining, and the message clear. No more bail-outs!

In Florence, between 400 and 500 people gathered on the front steps of the City-County Complex, despite occasionally threatening clouds.

The Star Spangled Banner was sung by a lovely Chinese woman, whose American journalist husband described what it would have been like to report on such an event in China — or try to report on it. 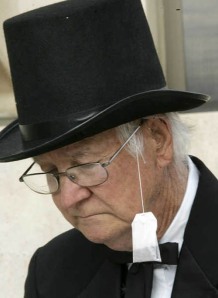 The Pledge of Allegiance, patriotic songs such as God Bless the USA, and several excellent speeches were included. Don Lowe (garbed as a sad Abraham Lincoln) read excerpts from some of President Lincoln’s quite appropriate writings.

Of course, the mainstream media under-reported the number of tea parties and attendants, no surprise. Even our local daily newspaper said there were “over 100” people in the crowd. Yes, well over 100! I stopped counting at 400 myself, but several others who did a more thorough count reported over 450 men, women and children present on those courthouse steps.

Today, David Axelrod, so-called advisor to the President, commented in a television interview that such protests were misdirected and possibly unhealthy. This, after the Department of Homeland Security’s recent inclusion of returning veterans and grassroots pro-life activists such as me on a list of possible threats to national security!

Well, I hope this movement of the “loyal opposition,” Republican / Democrat / Independent, does prove to be unhealthy to the re-election of those who think our Constitution is outdated and that freedom of speech and freedom of assembly are terrorist-risks.